You can see that this house has two chimneys. The original house, built in 1727 by Artemas Ward’s father, Nahum was the left portion only.  In 1785, the addition was added to the right.  It was here in the addition that Artemas and his wife Sarah and their children lived. His eight children slept upstairs, so Artemas made a hole in the ceiling so he could hear what the children were doing upstairs. There are a total of 13 rooms in the house.

Artemas Ward was a farmer and owned many acres of farmland around the house. The original barn is to the left of the house. In this barn is the original carriage that belonged to the General. He died in his house when he was 72 years old in 1799. He is buried with other members of his family in the Mountain View Cemetery. This great American patriot will be remembered for being the first Commander in Chief of the American Army, even before George Washington.

To learn more about the Artemas Ward house, you can visit their website. You can also listen to an audio clip of Dr. James Smith. 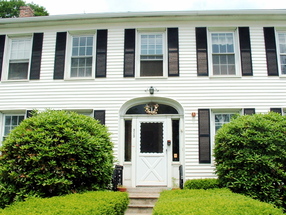 This was the home of Dr. Brigham. The house was built in 1822 by Calvin Stone. Dr. Franklin Whiting Brigham lived in this house with his father Dr. Adolphus Brigham. The younger Dr. Brigham was born on March 1, 1841. He went to Harvard Medical School and graduated in 1865. Dr. Brigham served two years as acting assistant surgeon in the United States navy. He then came to Shrewsbury to practice medicine.

As he grew up he became a kind and wise doctor. The more he worked on being a doctor, the more people wanted him for a doctor. With so many people liking him, he became famous in neighboring towns as well. Even when he was very tired and busy, he was never too tired or busy to take care of someone in need. He would travel 20-30 miles to visit the sick. 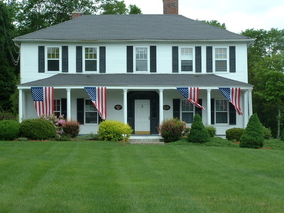 This was Captain Richardson's House. Reverend George Allen built this impressive house in 1825. The house is set back from Main Street and has a large front lawn. The front of the house is covered with flat boards instead of clapboards. Captain Richardson did not get to enjoy this home for very long. His clipper ship sank when he was returning from Liverpool to Boston in 1835 and he lost his life. 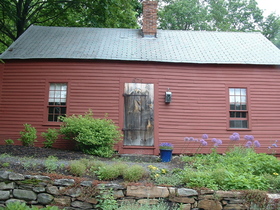 This barn red house known as the Little House. Notice the boards on the home are extremely narrow. The chimney is still there from when the house was built in the late 1700’s. An old wall is still standing in front. If you were to look in back, you would see a later addition. This home was used as a factory for medicine produced by Dr. Phelps who lived next door. 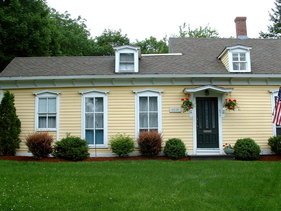 Dr. Azer Phelps was not the first owner of this house. It was first owned by Jason Ware, who built the house in 1793. There were two separate houses, but they were joined together in the late 1790’s. Jason Ware gave the house to his son-in-law Dr. Phelps. In the front of the house were two large sycamore trees so the house became know as The Sycamore Lodge. It was easy for Dr. Phelps to go next door to make his medicine. The medicine was stored in little brown bottles. Two of these same bottles are in the Historical Society. 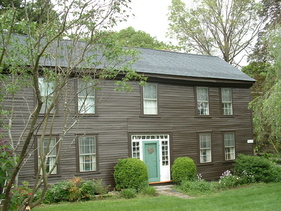 This house looks as it did when Nathaniel Holden built it in 1769. This house is special because John Mason JR, a well-known gunsmith, lived here. 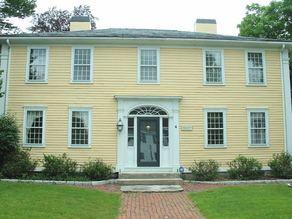 This beautiful yellow house was built for Samuel Haven. However, he never lived there. Instead, he sold it for $1500 to Edward Newton in 1822. The following year, Newton sold it again to Henry Baldwin.

This house is known as the Jonas Stone house. Jonas Stone was married to Lucy Cushing. She was the daughter of Colonel Job Cushing, first minister of the Congregational Church, Job Cushing was also the leader of the Shrewsbury Minutemen. Jonas Stone moved into this house when he was 63 years old. He was the steward of Leicester Academy in Leicester, Massachusetts and he ran a tavern in Boston. 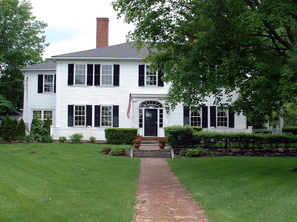 This is the Samual Haven house located at the intersection of Boylston and Prospect Streets. Built in 1816, it was the home of Samuel Haven who lived in this house while he operated the Old Cushing Haven Tavern, located on Main Street.

If you stand in front of the gated entrance, you can see the original doorway with a fan window overhead. This gorgeous house also has windows in the front framed with shutters. There is a porch on the right.

In the late 1800’s, the house was purchased by Hiram Loring. He added a three story addition to the house in 1888 and turned it into a hotel called the Highland House or Highland Farm House. It later became known as the Shrewsbury Inn. Today, that addition is no longer part of the house and it is once again a private home.

As you enter Mountain View cemetery through the church parking lot, you are entering through the Ward gates.

In 1730, the town voted to clear the land and fence it in for what is today called Mountain View cemetery. A long time ago, when someone died, a small plot was set aside from one’s own land to bury the family member. As you walk through the cemetery, you will notice many famous people buried there: General Ward, Levi Pease, Dr. Sumner, Dr. Flint, Captain Howe, and Joab Hapgood.

As you enter the cemetery through the Ward gates, look just to the left of you. There stands the sight of Artemas Ward’s family tomb. Artemas Ward was a general in the American Revolutionary War. He was also one of the representatives in the United States Congress. He was the Speaker of the House in the Massachusetts General Court and was a deacon in the First Congregational Church in Shrewsbury. In 1916, Artemas Ward had a school named after him that was built in Shrewsbury. The Artemas Ward homestead was deeded to Harvard University, his college, in 1925. Harvard University still owns his house today. Read about him on his grave stone.

Another interesting gravesite is found to the east of the Ward burial plot (on the right if you enter from the Ward gates).  You are probably wondering who is buried here? Here is a very interesting and important person from colonial times- Levi Pease, who is known as the “Father of mail stage coaches.” Soon after the Revolutionary War ended, Pease established the first route to deliver mail and became the first contractor to carry the United States mail. He owned a tavern along the route, which exists today as a private home, located at the corner of Walnut Street. Pease Tavern was a favorite spot for travelers to stop and rest.

After visiting the first two graves near the entrance, walk north into the cemetery and look to your left for a tall monolith. This is the grave of Joab Hapgood born in 1804 and who died in 1890. His grave marker is the highest monument in the cemetery.  Joab Hapgood was a successful gun manufacturer. He fought in the Battle of Gettysburg during the Civil War. He also was an important Shrewsbury resident, serving as selectman, moderator, clerk and assessor for the town. He invented a certain type of plow. He used this plow to help plant a row of maple trees along a town street that later became known as Maple Avenue.

In order for a town to become a town in colonial times, it needs to have a Church. The very first church was built in 1721 on this exact spot. One of the leaders of this early church was Nahum Ward, Artemas Ward's father. It’s interesting to note that the first two ministers of the church, Job Cushing and Joseph Sumner served for almost 100 years combined.

After 45 years, the church was taken down and the boards were saved for the new church which was built in 1766. The building committee included Daniel Hemenway, Henry Baldwin, Silas Witherby, Nathan Howe and Artemas Ward, following his father’s example of being a church leader. It was built with the help of all the townspeople. This church is still being used today, more than 240 years later.

The steeple was added in 1807 and the building was moved in 1834 putting logs under the building and then rolling the building on the logs.  Wow!!  They moved the building 50 feet back from the common and swiveled it ninety degrees to its present location, facing South.

Standing on the common, looking at the front of the church, you see two stairways going up to two entrances. You might wonder why they would need two separate doorways so close to each other. If you guessed for men to enter from one doorway and women from the other, you are correct. Families who owned box pews would worship together in their pew; those who did not have a box pew, sat on seats in the middle of the church, men on one side and women on the other.

Can you believe that in one room there were children from four years old to twenty-two years old? Only the children who lived near Shrewsbury center went to this school because there were other schools in town. It was also the first high school. To go to high school you had to pass a test. Sometimes only one or two students passed the test. Sometimes no one passed the test! At times, there were only 5 or 6 students in the graduating class.

This building is now the home of the Shrewsbury Historical Society.

To learn more about the Old Brick Schoolhouse, listen to Beverly Fisher, a longtime Shrewsbury resident who went to school there.

The pictures below were taken while Bill Glascock was the owner and it operated as a bed and breakfast.
In this house lived Dr. Joseph Sumner who became the second minister of the First Congregational Church after the church’s first minister, the Rev. Job Cushing died suddenly in 1760. Sumner was born in Pomfret, Connecticut in 1740 and was educated at Yale University. He became minister at the age of 21 and he served as minister of the church for 62 years. Sumner bought the land on which this house stands from Artemas Ward, the famous American Revolutionary War General, and Sumner built the house in 1797.

In June of 1812, Sumner delivered his 50th anniversary sermon. In his sermon, he talked about how Shrewsbury was formed. Sumner lived in this house until his death on December 9, 1824. Joseph Sumner died in his sleep.

Three additions were added to the house from 1817 to 1913 and it now has 22 rooms, thirteen fireplaces, and eight bedrooms. It has a hidden closet that could have been used for the Underground Railroad. A hidden staircase was added when the last addition was built. This staircase was built to be used as a fire escape.

There is also a “hide-away’ bed that folds into a closet which Rev. Sumner used for overnight guests. An important discovery was made in the 1980’s when a letter from George Washington to Artemas Ward was found in a safe in the home.

Bill and Ellen Glascock were the third owners of the Sumner house. For many years, they operated it as a bed and breakfast. On April 15, 2010, James and John Head and their partner David Chiampa took ownership of the Sumner House. It is currently the Heald and Chiampa Funeral Home.

To learn more about the Sumner House, listen to Bill Glascock, third owner of the house.

These pictures depict Shrewsbury Common as it looks today.